Cran-Apple was the third e-juice flavor to be added to the Loaded e-liquid line. It is different from all the other e-liquids in the series. Cran-Apple is the only e-juice from Loaded that has straight fruit flavor. Although Strawberry Donut contains fruit flavor, it also contains donut flavor. Cran-Apple is a mix of cranberry and apple flavor. The e-liquid has a 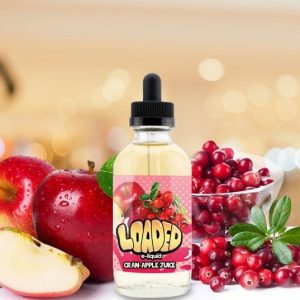 fruity and delicious taste that will tantalize your taste buds. Cran-Apple is very flavorful and smooth. The fruit flavors do not come off as artificial or chemical in any way. If you love fruity e-liquids or you have a thing for the taste of apples and cranberries, you need to try this one. Cran-Apple is bursting with flavor.

Cran-Apple by Loaded is the kind of e-liquid that you can vape all day long. Its sweetness level is just right. There is also a hint of tart flavor in the blend, but it is not very pronounced. The taste of apple and cranberries are well balanced in Cran-Apple. Not one fruit flavor overpowers the other. Right from the inhale you can taste the cranberry and apple flavor. On the exhale, you will get the same taste. You will get a hint of minty coolness on the exhale when vaping Cran-Apple.

Cran-Apple by Loaded has a vegetable glycerin (VG) and propylene glycol (PG) ratio of 70/30. You will have no issues vaping this e-liquid from either a sub-ohm tank or an RDA. This e-juice will not blacken your coils. The vapor production of Cran-Apple is magnificent. You will get huge clouds of vapor from each hit. This is surely one for cloud chasers.

Like other e-liquids in the Loaded series, Cran-Apple is produced with different nicotine concentration levels. You can get this e-juice with either 0mg, 3mg or 6mg of nicotine. The e-liquid has a very mild throat hit. You will not get any burning sensation in your throat from vaping Cran-Apple even when you turn up the wattage. The touch of mint in this

e-liquid adds a nice effect to its throat hit. You will barely feel any throat hit when vaping the version of this e-juice with 3mg of nicotine. If you want a stronger throat hit, you can opt for 6mg.

The packaging design of Loaded’s Cran-Apple is quite sleek. The e-liquid comes in a colorful box with the usual labeling and design. Inside the box, you will find the e-liquid in a clear glass bottle with a dropper cap. You can conveniently use the dropper cap to fill your tank or drip on your coils. There is a label on the bottle which features the same design that you will find on the box. Overall, the packaging of this e-liquid is top-notch. The box and label contain a lot of information about the product and even some warnings.

Cran-Apple is one of five e-liquids in the Loaded series. The other e-juice flavors are Cookie Butter, Smores, Strawberry Donut, and Glazed Donut. Loaded has emerged to become one of the most popular e-liquid series on the market today. You can find Loaded e-liquids at just about any vape store. The Loaded line is produced by Ruthless Vapors. Ruthless, which is based in Southern California, is one of the biggest companies in the US vaping market. Loaded is just one of the e-liquid lines from Ruthless. The other Ruthless e-juice series are Ruthless Tobacco, Pretzel Shack E-Juice, and MFG E-Juice.