Are you a die-hard fan of the 2016 American superhero film based on the DC Comics antihero team Suicide Squad? Well, I am and one of my favorite characters is in fact Harley Quinn. Perhaps, this is one of the reasons why I was attracted into trying this Harley Quinn e-liquid flavor made by Vape Suicide.

As you all know, Dr. Harleen Frances Quinzel aka Harley Quinn is a bubbly and psychotic character who loves to do all sort of crazy things. Let us see if this new e-liquid named after her live up to Harley Quinn’s colorful character. I am so excited!

According to the product profile of the Harley Quinn e-liquid on the Vape Suicide website, this blend is sampled from some cotton candy found on the local carnivals (sounds interesting). “It was a rough job, but somebody had to do it. On the way home from the carnival, we stopped at the market and got some fresh juicy watermelon. Then we added in a few squeezes of fresh oranges and the next thing you know, this amazing flavor was born!” 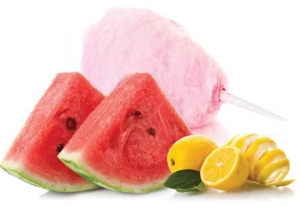 The product description sure did interest me and captured my attention (and taste buds). Well, flavor-wise, I love cotton candy flavor and the juice delivered. If you are not much of a sweet tooth like me, and the imagination of eating cotton candy alone starts to itch your throat, don’t worry the watermelon actually balances the sweetness. It also gives that refreshing feeling on your mouth.

So far, I have been vaping it for a couple of days now and I am already almost running out of e-juice. I call it my “flavor of the week” because I just can’t get enough of its taste. It can be a perfect all-day vape too! I have to agree with Lizard Juice when it said that this waterade and lemon melon cotton candy is both sweet and evil, just like Harley Quinn herself.

Looking at the packaging, it did reflect Harley Quinn a bit. The e-juice is stored in a bright, dark pink bottle with a mustard yellow label. The image on the label shows a skull and its socket (or eyes in layman’s term) shaped as hearts. And to copy the iconic look of the original Harley Quinn, the skull head wears the psycho patriotic tie-dyed pig tails. One tail is colored blue, while the other is red. (Just by merely looking at the bottle, you surely won’t miss who this image or the e-juice itself is portraying.) The image sits just top of the brand name Vape Suicide. The nicotine concentration level is also displayed in front.

In terms of throat hit, this e-juice does a pretty good job on keeping it smooth. Although it tastes like candy, it is mild and not too harsh on the throat. It delivers a satisfying taste that is not too intense or weak, just somewhere in between. Of note, the strength of the throat hit is expected to increase with higher nicotine concentrations. Anyways, I used the Smok Alien mod at 38 watts. And guess what? I was able to produce nice, almost perfect clouds. So far, I think it is safe to say that this is one of the best e-juices I have ever had.

For its price and flavor ratio, I can say that the Harley Quinn is already a cheap e-liquid. You can grab a bottle of 60 mL for only $24.95 at Lizard Juice.  This flavor comes in three different nicotine concentration levels to accommodate our needs. The highest concentration is 6 mg. Although this can already be considered low as compared with other e-juice companies that offer up to 24 mg, the 6 mg level is already more than enough for most vapers out there. Harley Quinn also comes in 3 mg nicotine level to cater average or starters and 0 mg for those who do not want nicotine.

Overall, the flavor is stunning, and even when used heavily, the taste does not diminish easily. This surely is a perfect mix of watermelon and cotton candy. This wasn’t something I thought I would like, but I still fell in love with it. I feel like I am The Joker, falling in love with Harley Quinn.