The Sigelei Moonshot RTA was one of the best RTAs released last year. It is the result of a collaboration between renowned Chinese vaping company Sigelei and American design team Suprimo Vape. The Sigelei Moonshot RTA is unique. Although it is quite small, it can handle up to 200 watts. Its performs well in terms of both cloud production and giving you rich flavor.

The Sigelei Moonshot RTA has a height of 32mm with a diameter. It can be used with most of the latest 200W mods 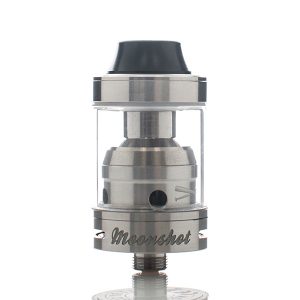 on the market. The tank is made of 304-grade stainless steel and Pyrex glass. This high power RTA performs just like an RDA. It supports a wattage range of 30 watts to 200 watts. There is a threaded gold-plated 510 pin at the base of the tank for attaching it to a mod. It is not advisable to use this RTA with a hybrid mechanical mod as the setup would not work well.

The Sigelei Moonshot RTA comes with a short wide bore drip tip. You can fit any standard 510 drip tip on it and vape. When you use the tank for a long time, the wide bore drip tip may get a little warm, so it is a good idea to have your 510 Delrin drip tip nearby.

The Moonshot RTA can hold 2ml of e-liquid. This is not a lot of e-juice, but it appears that the designer’s decision to give this tank a limited capacity is related to European regulations on the size of tanks. If you are a heavy vaper, you may need to refill the tank every 10 to 15 minutes. The tank has a top fill design. You would expect that refilling the tank will be a messy affair because of its small, compact size. But this is not the case. The tank is fitted with two large filling holes. You simply have to unscrew the top cap off to access the filling holes. The tank has a leak proof design.

One way that the Sigelei Moonshot differs from other RTAs on the market is its build deck. This tank does not have a 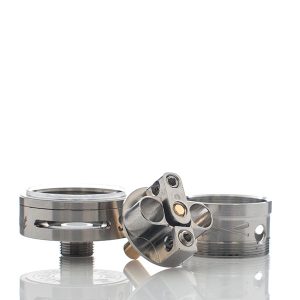 velocity-style build deck. Instead, it has a one-of-a-kind two post build deck. If you are no experience in building coils and wicking them, you may have some problems working with the Moonshot RTA. However, it would be easy for those who have some experience with this. Overall, it takes some getting used to. Luckily, you will find many YouTube videos and blog posts with instructions on how to rewick and rebuild the coil. Ensure that the coils are secured well and are close to the center post – but not touching it. If the coils are not close to the center deck, they may touch the chimney post and cause problems for you. Once you get the hang of rebuilding on this deck, it is very easy.

There are two large adjustable airflow slots near the base of the Moonshot RTA. This tank does not make any annoying whistling sound when you’re vaping with the air holes wide open.

The Sigelei Moonshot RTA comes in a colorful tin box. One look at the packaging and you would know that this is a quality product. The attention to detail in the packaging and the tin box is a really nice touch.

The Moonshot RTA is not for everyone. If you are willing to take the time to wick it up properly, you will relish the fantastic flavor and clouds that you will get from this tank. It costs about $24.95 in many vape stores. However, it is available on Ejuice Deals for only $14.

Review Of The 1st E-juice By Broke Dick