Apple Jam is the latest e-liquid from Jam Monster, and it lives up to what we have come to expect from this premium vape e-juice brand. If you have tried the company’s Blueberry Jam and Strawberry Jam e-liquids, then you know just what I am talking about. 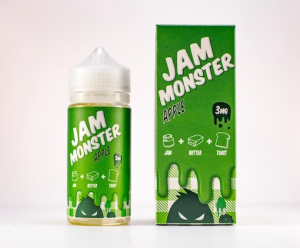 It costs about $30 for a 100ml bottle of Apple Jam in most vape stores. Like other releases from Jam Monster, this blend does not come in smaller bottles. However, you will get a free pack of Cotton Bacon with the bottle, so you are ready to wick your coil and start vaping.

Apple Jam is not exactly cheap, and that can be a put-off for some. But luckily you can find it on sites that offer e-juice deals like http://vapejuicedeals.com/. It costs just $12.99 on with about 60 percent off.

Apple Jam is for those who love buttered jam toast. It tastes like a freshly buttered toast with a generous serving of apple jam on top. This is not like your ordinary apple e-liquid. Besides the mellow taste of butter and toast that makes it unique, there are also some light notes of cinnamon in it. The best part of this blend is that it is not overwhelmingly sweet. It is not also too sour. It actually tastes like jam made from green apples. Apple Jam is definitely an all day vape.

The apple jam flavor is clearly the main ingredient in this e-liquid. The other flavors are more subtle, but they are there. If you purchase this e-liquid and you find that the taste is a little bit off, you may want to allow it steep for a while for the components to mix up properly.

Jam Monster’s Apple Jam is not one of those blends that come with a high concentration of nicotine. Like other Jam Monster e-juices, you can get the e-liquid with 0mg, 3mg, and 6mg of nicotine.

Apple Jam has a VG/PG ratio of 75vg and 25pg. This means it is quite thick and is perfect for dripping. The fact that it is a MAX VG mix guarantees you smooth vaping.

The throat hit is almost non-existent when you are using the version of this Jam Monster e-liquid with 0mg and 3mg of nicotine. This is one of the effects of its high VG level. This kind of makes sense since it is a breakfast blend. At 6mg, the throat hit should be better, but it won’t be comparable to some other e-liquids on the market.

Apple Jam takes full points for vapor production. You will blow massive clouds after each hit of this e-liquid. The fact that the taste is so complex and balanced means you won’t get tired of it quickly. The large clouds that you get is an another reason to keep vaping on it. 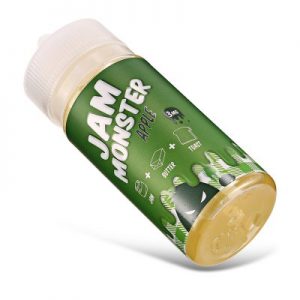 Apple Jam by Jam Monster comes in a chubby gorilla bottle with a cool white and green label design. The bottle has a dripper cap, so you will not spill the e-juice when you want to use it.

Jam Monster is an e-liquid brand under the Florida-based Fresh Juice Company. It is clearly one of the company’s most successful brands. Apple Jam is the third and latest breakfast blend released under Jam Monster. Prior to Apple Jam, the company released Strawberry Jam and Blueberry Jam e-liquids, which were both received well in the market with raving reviews. Fresh Juice Co. also has other delicious e-liquid blends on the market including The Max, The G.O.A.T, and Clean Cream.

Visit http://vapejuicedeals.com/ for some incredible discounts on e-liquids.