Who doesn’t love a Cuban cigar? Now, we all know that e-cigars are merely an imitation of the real thing, that is why most e-cigarettes can’t even stand close to traditional cigarettes. But even the word delicious may not suffice to describe the experience you can get from the Cuban e-Cigars by Atomic Dog Vapor. Read my full review below.

“Our eCigars are available in a full-bodied Cuban (24 mg nicotine) or a light Cuban (12 mg nicotine). Abundant vapor with a pleasant aroma like that of a mild pipe tobacco. No falling ash… stays cool so you can put it in your pocket. Or your golf bag. Or purse. (We don’t judge.)”

“Our eCigars can be enjoyed in many places where you can’t smoke a traditional cigar. (Of course, we always recommend asking your host or server. Be prepared to demonstrate… an eCigar may be unlike anything they’ve ever seen! Enjoy! And Relax.” 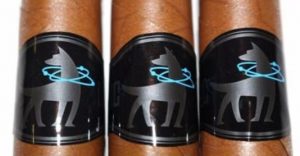 Presentation-wise, you will already know that a huge amount of effort has been exerted to make Atomic Dog Vapor Cuban eCigar look like a real one. In fact, I am so loving the synthetic textured tobacco leaf that covers its outer casing. It even has a faux ash on the end. The tip is equipped with a blue led lighting system. This is intended to alleviate other people’s concern that you are smoking a real cigarette. The blue light tells them you are not smoking an actual cigarette. It does not produce smoke by the way. Instead, it gives off a vapor that resembles smoke but this disappears after a few seconds.

Atomic Dog Vapor Cuban eCigar is powered by a battery that will not disappoint. Each stick allows you to get approximately 1800 puffs. This is equivalent to between 10 and 12 cigars, and for an average user, this is more than enough to last for an entire day. Since they are disposable, the batteries are not rechargeable. But don’t worry, all sticks are shipped fully charged.

But what makes Atomic Dog Vapor better than others is the premium quality and delicious taste each eCigar produces. For me, it has one of the best cigar flavors you can find on the market today. The Cuban flavor is full-bodied and rich, and it will only make you want to puff for more. The flavor is so authentic you may even mistake this for a conventional cigarette. 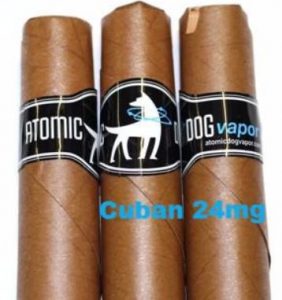 Cuban eCigars by Atomic Dog Vapor come in two nicotine levels. It is available in 12 mg (light Cuban) and 24 mg (full-bodied Cuban) of nicotine. Other than the exquisite flavor profile, I have to commend the immense amount of vapor produced by this eCigar too. Thanks to the high-rating atomizer and powerful battery, you can definitely expect thick clouds of vapor. Your nostrils will also enjoy the pleasant aroma that resembles a mild pipe tobacco. Trust me, you won’t have to deal with people complaining about tobacco stink. What’s more, your mouth will surely savor its delightfully refined flavors. Yum! It also has an awesome throat hit in case you are wondering.

You can buy your own Cuban eCigar for as low as $13.99 only at Atomic Dog Vapor’s official website. But you can also thank the baker who decided that one extra was needed in a dozen. Enjoy 13 exceptional cigars begging to be smoked for the price of a dozen only. That’s right when you grab the “Baker’s Dozen” Cuban e-Cigars, you will get 1 free eCigar for every purchase of 12 eCigars.

Overall, Atomic Dog Vapor Cuban e-cigars are a perfect on-the-go smoke. You can enjoy puffing its flavor in many places such as restaurants, at home, car, or office. It is very convenient to use too. Flavor is spot-on and delicious, with good vapor production and pleasantly mild throat hit. Since it is disposable, you won’t have to worry about recharging or refilling the cartridge. (Speaking of a cartridge, Atomic Dog Vapor has e-Cig cartridges up for grabs too. Just visit its website.)

With Atomic Dog Vapor Cuban eCigars, you are definitely getting value for every penny you spend. Whether it is on the quality, appearance, design, or performance, this baby has everything you need from an eCigar. Until then, happy vaping people!